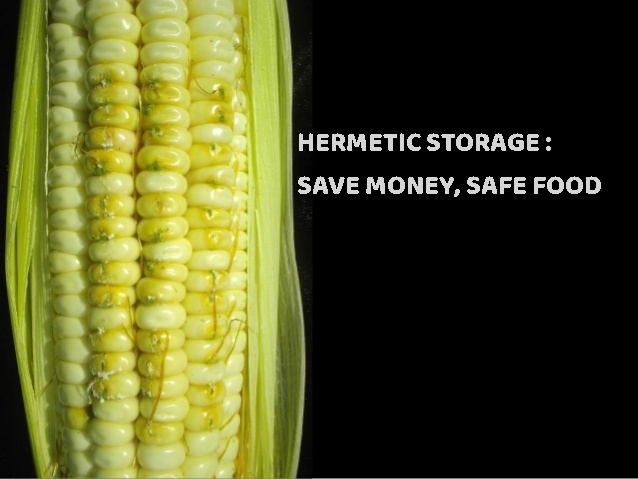 In the fight against aflatoxin contamination and its devastating effects on human health and food security, storage is a critical battleground.

Although grain is initially contaminated in the field, aflatoxin can grow at alarming rates during storage, rapidly increasing the concentration of toxin and exposure over time, as maize is incrementally taken out of storage for a family’s own consumption or sold into the market for

others to purchase, aflatoxin  levels in maize in different areas grow by an average of 24 to 92 percent per month when stored in traditional polypropylene bags, commonly used by smallholder farmers in East Africa.

CropSto Hermetic storage Bags arrest aflatoxin growth nearly entirely. This has been substantiated through research in both real-world and controlled settings. Complemented by recent

Aflatoxin is a highly toxic substance caused by the growth of toxic strains of Aspergillus fungi, and is known to cause liver cancer, immune-system suppression, growth retardation, and death in both

humans and domestic animals. It affects many important food crops in sub-Saharan Africa, including maize and groundnuts, and is present in products such as milk, meat, and eggs through contaminated animal feed. Mothers also pass the toxin on to their infants through breastmilk.

The key reason farmers are buying hermetic bags is driven by their dislike of using pesticides on their main food source. The pesticide is needed to prevent insect infestation, and farmers tend to use more than is actually recommended.

Even when farmers use insecticide it does not stop insect damage completely – hermetic storage does. Additionally, hermetic storage prevents  natural moisture loss. This means that at the end of storage the farmer potentially has around 4.5 kgs per 90 kg bag of additional maize to eat or sell

These upsides have an immediate and visible impact on a farmer’s finances and food security.

Thus, they are the true selling points in marketing hermetic bags to farmers and will drive a widescale Shift in purchasing decisions by farmers away from traditional PP bags and insecticide to hermetic torage options. Arresting aflatoxin is an unseen benefit.

Currently, most farmers use insecticide and spend around $0.85 per bag per season. Hermetic bags are designed to last between 2 to 3 seasons with the cost per use between $0.85 to $1.25. The combined value of the reduction in the loss of weight (4.5kg) as referenced above more than makes up for the additional cost of the bag within the first season.